SHHH!! Ensemble is “truly virtuosic and intense”. Percussionist Zac Pulak and pianist Edana Higham pride themselves on developing fresh audiences for new music by commissioning and performing works that are provocative and compelling, in creative collaborations and innovative settings. They have appeared at the Shenkman Arts Centre, Eckhardt-Gramatté Hall (Calgary), Trinity Church (Toronto) and Edmonton’s Convocation Hall, and at universities across Canada, showcasing works written by John Beckwith, Jocelyn Morlock, Kelly-Marie Murphy, Noora Nakhaei, and many more. Recent highlights included performances for Newfoundland’s Tuckamore Festival and Ottawa Chamberfest, a National Arts Centre #CanadaPerforms livestream appearance, and a residency in the Banff Centre’s prestigious Evolution: Classical program. Their Toronto debut was featured on CBC Radio 2’s “In Concert”, and Zac and Edana have been appointed co-Artistic Directors of the Ottawa New Music Creators for 2021-2023.  SHHH!! Ensemble’s debut recording Meanwhile will be released in 2022 on the Analekta label.

Their program at Pontiac Enchanté is called Spirits.  They write the following about the program: "Spirits is a journey through composers’ reflections on the nature of creativity, Scotch whiskey, and the beyond." 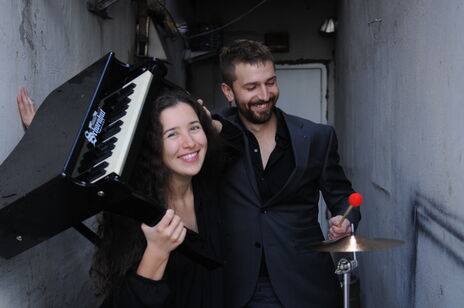