Adam Cicchillitti and Steve Cowan have set a benchmark in the world of classical guitar with their award-winning recordings, commissions of major orchestral works, and competition performances. On their debut release, FOCUS, Tracy Anne Smith (American Record Guide) states that “with sensitive, authoritative, au courant playing, Adam Cicchillitti and Steve Cowan retain their individuality while communicating like old friends.” FOCUS was awarded Classical Recording of the Year at the East Coast Music Awards in 2021. Also in 2021, the duo released it’s third album with Analekta Records, INTIMATE IMPRESSIONS, featuring original arrangements of piano, harp, and guitar music written in 20th century Paris. The album has been streamed over 1.5 million times worldwide. Cowan and Cicchillitti toured Canada under the auspices of Prairie Debut in 2020-2022 and with Debut Atlantic in 2018. They were awarded third prize at the 2021 international ensemble competition of the Guitar Foundation of America, arguably the most prestigious guitar ensemble competition in the world. The duo has established its identity at the forefront of new music for guitar. At the inaugural 21st Century Guitar Conference in Ottawa, Steve and Adam commissioned and premiered nine new electroacoustic works by the New York-based composer collective, ICEBERG New Music. In 2022, the duo undertakes their most ambitious project with the support of the Canada Council for the Arts: to premiere and record six new commissions for two guitars and orchestra with Ottawa-based chamber ensemble 13 Strings. Cicchillitti and Cowan are sponsored by Augustine Strings and play guitars by Sergei de Jonge and Bruno Boutin. 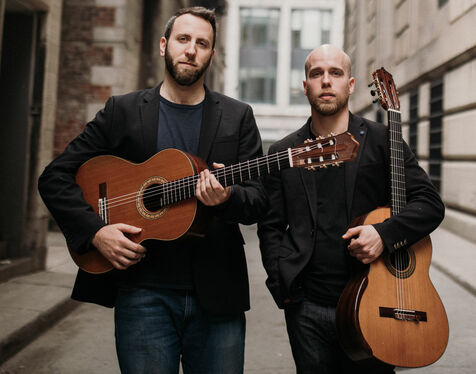