The Caelis Academy Ensemble was formed in Ottawa in the summer of 2017 by Matthew Larkin and a group of like-minded singers who had shared, in some cases for many years, a lengthy communitarian experience as liturgical musicians. The intent was to create a chamber choir in the cathedral tradition, which combined elements of spiritually-inspired, historical and contemporary repertoire, in an environment which holds fast to the enjoyment of learning, in an ensemble that is representative of many ages and backgrounds. From its inaugural performance five years ago, the choir has presented over sixty concerts and livestreams, representing many major liturgical and concert works, in collaboration with a variety of professional, instrumental ensembles. Oratorio-style presentations have included Israel in Egypt and Messiah, by G. F. Handel; St. John, and St. Mark Passions, Magnificat, Motets, and Mass in B minor, by J. S. Bach; Requiems by Johannes Brahms, Gabriel Fauré, Maurice Duruflé, and W. A. Mozart; and, Passio by Arvo Pärt. Themed concert performances have included Italian, French, and English renaissance masterworks; moderns by Vaughan Williams, Finzi, and others; contemporary music from Europe and the Americas, and original Canadian compositions. The choir's membership is largely of the student and postgraduate generation, with singers hailing from the University of Ottawa, Carleton University, McGill University, Dalhousie University, and the University of Toronto, many of whom began singing together either at Ottawa's St. Matthew's Church, or Christ Church Cathedral. 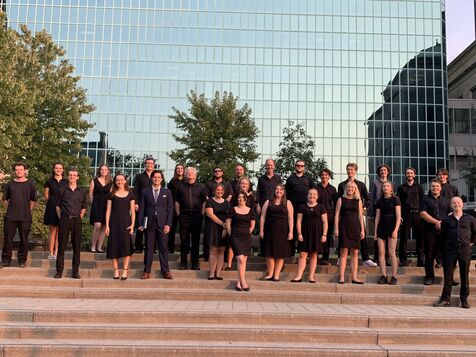