Among Friends: Music for Clarinet, Cello, and Piano

Chamber music is often performed by formalized groups: 'The ____ String Quartet', or '____ Ensemble'. However, equally important for the performance of chamber music are less formal collaborations - artists who gather to play a single concert and then go their separate ways. These performances are often sparked by friendship between the various performers, who enjoy each others' company and want to make sure their paths meet. This program, put together in exactly that spirit of collaboration, is a celebration of friendship. Brahms's Clarinet Trio was written late in his life (1891), after he had announced his 'retirement' as a composer. He was prompted to come out of retirement by the inspiring clarinet playing of his friend Richard Mühlfeld, for whom he wrote a set of chamber works built around the clarinet. Zemlinsky's Clarinet Trio was written five years after Brahms's trio, and was his entry for a competition in which Brahms was a judge. Zemlinsky won the competition, and the result was a recommendation from Brahms that the piece should be published, launching Zemlinsky's career as a composer. The two men were friends for the last few months of Brahms's life. Chan Ka Nin's 'Among Friends' was written for the Amici Chamber Ensemble - the word 'Amici' means 'friends' in Italian. The three members of the group were Chan's colleagues at the University of Toronto when the piece was written in 1989. 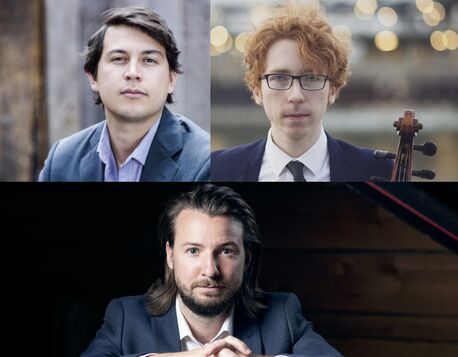